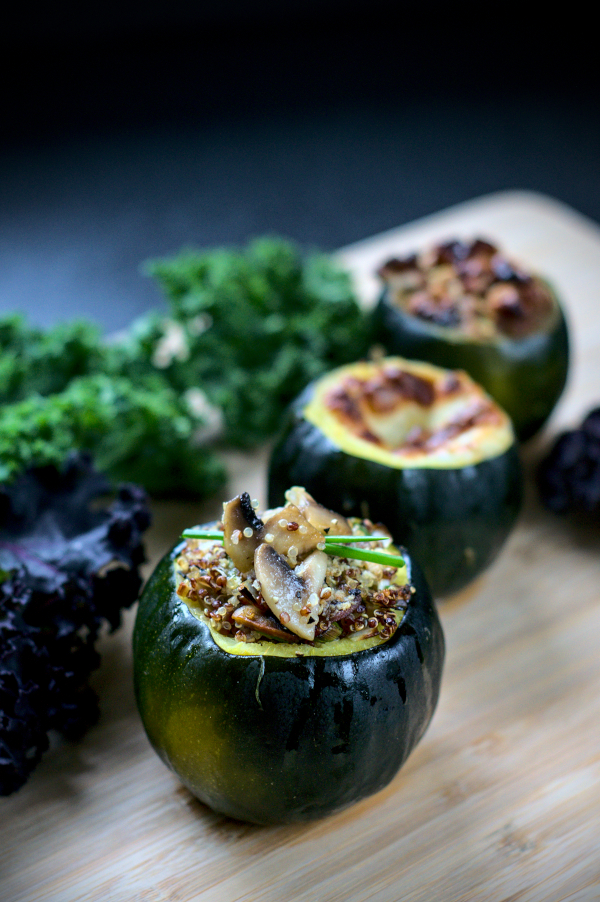 Today again something for veggie lovers like me 🙂 In my Friday vegetable box once I got three small gem squash. As I’ve never tried them before, so again I had to do some research. Gem squash is a type of summer squash and they are edible on every stage of its growth. Early gems are size of golf balls, and the skin and seeds are edible. My gems where size of an orange and seems to be very hard on the outside. Surprisingly the cooked very fast, and after 10 minutes they were quite soft and ready to eat. At first I thought to stuff them all with the same filling, but I was too curious how would they taste prepared also as a dessert. So finally I came out with 3 different options:

Each of them is really easy and quick to prepare. You need about 10 minutes to cook them, 5 minutes slightly cool them down and about 15-20 minutes to bake them. So in less than hour you can get tasty looking and pleasing for the eye meal, you can serve as a weekend lunch or dinner. Baked gem squash will be also great for all kind of celebrations or parties the more so because of the speed and ease of preparation – little effort big effect.

Comparing to winter squash, gem squash as a summer veg contains less carbs, so it’s perfect as a keto option. 100g of gem squash contain about 5.9g of carbohydrates, similar to broccoli and cauliflower, if you’re on ketogenic diet keep it in mind calculating your daily dose of carbs. Gem squash is low in saturated fat and sodium. It is also a good source of protein, vitamin A, phosphorus and copper, and a very good source of vitamin C, vitamin K, vitamin B2, B6, B1, B3, folate, magnesium, potassium and manganese. And as other squash may reduce your risk of certain conditions, including heart disease, lung cancer, and mental decline.

Gem squash is universal enough to be perfect for sweet and salty dishes, for those of you who are vegan, but also for meat lovers – for stuffing or as an addition to stew or goulash. If you haven’t try gem squash before, I encourage you to do it. Maybe you’ll like its delicate flavour and texture with slightly earthy taste.

INGREDIENTS (as I had only 3 gem squash and made each one in a different way, I decided not to place the amount of each ingredient)

First cook gem squash in salted water for about 10 minutes or until tender, depending of the size of the squash. They surprisingly cook very quickly, so keep an eye on them not to overcook. Drain and place in cold water for about 5 minutes. Cut off the tops and scoop out the seeds and some flesh. If you’ll make sweet cinnamon gem squash save the flesh and seeds, they are soft and edible (they are like courgette seeds, but larger).

Finely chop or squeeze garlic through the press. Grate or chop some mozzarella cheese. In each squash place a ½ teaspoon of garlic pinch of salt, ⅓ butter and lots of mozzarella cheese. Place walnut on top. Bake in 180° until golden.

Cook quinoa in salted water until tender. Finely chop spring onion. Remove the skin or rinse mushrooms and slice them. Heat the pan adding slice of butter, fry mushrooms until golden on a high heat. Combine together quinoa, mushrooms, spring onions, grated parmesan cheese (or some vegan cheese), coarse pepper and bit of salt if needed. Fill up each gem squash. Bake in 180° for about 15 minutes. Sprinkle with some more parmesan cheese or chopped spring onion.

Take flash and seeds scooped from squash and smash it with a fork, adding cinnamon, butter or coconut oil, brown sugar or other substitute. It’s good to do it when flash is still warm, butter will be able to combine better. Make it as sweet as you like. Fill up each squash, place couple walnuts on top and a little bit of butter (or coconut oil). Bake in 180° for about 15 minutes, keep an eye on walnuts, so they won’t get burned. Serve hot with a scoop of cream cheese, mascarpone will also go great or for vegan option – coconut cream. You can sprinkle with a little more cinnamon.

If you’re looking for easy-to-make recipes for everyday meals, or need an inspiration, how to be more mindful of your eating choices and learn how to nourish your body, you’re in a right place. Because healthy body (and mind) doesn’t need shitty food as a treat.

Find what's good for you and follow your gut!

EAT BETTER, FEEL HAPPY is a place full of tried, true and not intimidating recipes. I make food using simple ingredients and lots of love. Enjoy cooking with me, get creative and bring more happiness into your life!